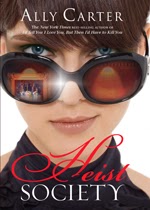 When Katarina Bishop was three, her parents took her to the Louvre...to case it. For her seventh birthday, Katarina and her Uncle Eddie traveled to Austria...to steal the crown jewels. When Kat turned fifteen, she planned a con of her own--scamming her way into the best boarding school in the country, determined to leave the family business behind.

Unfortunately, leaving "the life" for a normal life proves harder than she'd expected. Soon, Kat's friend and former co-conspirator, Hale, appears out of nowhere to bring her back into the world she tried so hard to escape. But he has good reason: a powerful mobster's art collection has been stolen, and he wants it returned. Only a master thief could have pulled this job, and Kat's father isn't just on the suspect list, he is the list.

Caught between Interpol and a far more deadly enemy, Kat's dad needs her help. For Kat there is only one solution: track down the paintings and steal them back. So what if it's a spectacularly impossible job? She's got two weeks, a teenage crew, and hopefully just enough talent to pull off the biggest heist in her family's (very crooked) history--and, with any luck, steal her life back along the way. (Amazon.com)

1. Katarina Bishop - she is an amazing heroine and I LOVED her. She's fun, she's relatable, she just seems real and I'd totally be up for having her as a best friend. This girl is smart, loyal and strong - she is the mastermind behind a heist of a famous museum - and she's a teenager! She's the kind of character I like to read about, and I want more young girls to read about.

2. This is a story that places an emphasis on friendship, family, and loyalty: I don't know about you, but I feel like a lot of the stereotyping of YA books has to do with how all YA books are about love triangles. I don't think this is true, but I do see a lot of romance books in the YA market - NOT that these are the only books and not that I have a problem with it. (I enjoy a good romance too). However, I love seeing books where the emphasis is on loyalty, family and friendship. I love to see that their are books where the teen isn't just striving to get out of the nest and their family life isn't awful. Most of all, I enjoy a book where the focus is friendship, where the focus isn't primarily on the main characters getting together but on building trust and working through things.

3. It's a book about a heist…a museum heist…masterminded and preformed by teenagers…working against a clock and with the overhanging threat of a mobster-type baddie waiting for them to screw it up. So, basically all things awesome and suspenseful and great!

4. It's FUN: I have read Heist Society before, more than once, and I know I will come back and read it again. It is just such a FUN read, it's interesting and funny and suspenseful and fun. I love the characters and the premise, it's just a really enjoyable read. It is just a feel good book.

5.  The audio version - it's amazing! I really loved the narrator for the audiobook, she did great voices for each character. She had nice pacing, her tone was great, and her voice overall was very enjoyable. One thing I really enjoyed about her was the fact that each character she was reading a line for had a distinct voice so I could tell who was supposed to be talking at each part. Loved her Kat voice, and the twins, and especially her uncle!

6. It's been optioned to be made into a movie! - Which means hopefully it will be making it to the big screen, like so many other popular YA books recently. Personally I am a huge fan of heist movies and this one would be like Ocean's 11 except even more awesome (in my mind) as it would have a cast of young thieves and a female mastermind!

7. The Places - the story takes place in a variety of great locations: New York City, Paris, London. Who doesn't love a story with some international travel?

8. The Other Characters - I really loved all of the great characters in this book, especially the teens. The teen cast was strong with a nice mix: the mystery Hale, the grifting Gabrielle, the hilarious twins, and super-smart Simon, not to mention the mastermind Kat! Then there were characters like Uncle Eddie and Marcus, equally amazing and enjoyable.