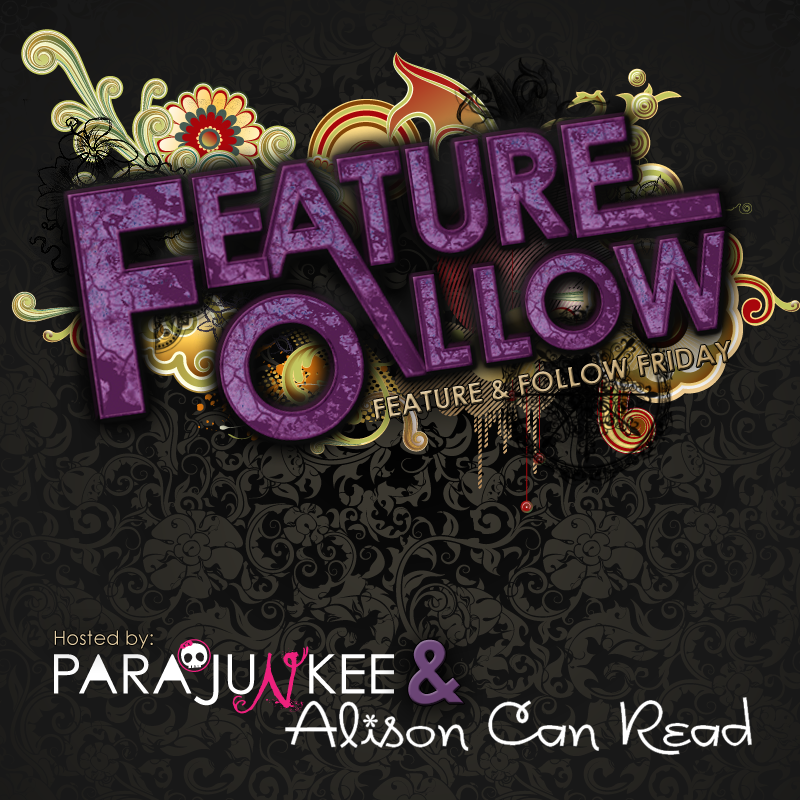 The Feature & Follow is hosted by TWO hosts, Parajunkee of Parajunkee’s View and Alison of Alison Can Read. Each host has their own Feature Blog and it is a great way to learn about new blogs and network with fellow bloggers!

This week's question:
Recommend some of your favorite back-list books
(books that are at least a few years old, 5-10 year range rather than classics)

For this question, I'm trying to recommend a few beyond my obvious favorites (such as the likes of, oh say the Harry Potters), so here are a few:

The Amaranth Enchantment by Julie Berry (2009)

When Lucinda Chapdelaine was a small child, her parents left for the royal ball and never returned. Ever since, Lucinda has been stuck in perpetual servitude at her evil aunt’s jewelry store. Then, on the very same day, a mysterious visitor and an even more bizarre piece of jewelry both enter the shop, setting in motion a string of twists and turns that will forever alter Lucinda’s path. In this magical story filled with delightful surprises, Lucinda will dance at the royal ball, fall under the Amaranth Witch’s spell, avenge her parents’ death, and maybe—just maybe—capture the heart of a prince.

Can You Keep A Secret? by Sophie Kinsella (2005)
Meet Emma Corrigan, a young woman with a huge heart, an irrepressible spirit, and a few little secrets:
Secrets from her boyfriend: I've always thought Connor looks a bit like Ken. As in Barbie and Ken.
Secrets from her mother: I lost my virginity in the spare bedroom with Danny Nussbaum while Mum and Dad were downstairs watching Ben-Hur.
Secrets she wouldn't share with anyone in the world: I have no idea what NATO stands for. Or even what it is. Until she spills them all to a handsome stranger on a plane. At least, she thought he was a stranger. Until Emma comes face-to-face with Jack Harper, the company's elusive CEO, a man who knows every single humiliating detail about her...

The Goose Girl by Shannon Hale (2003)
Anidori-Kiladra Talianna Isilee, Crown Princess of Kildenree, spends the first years of her life under her aunt's guidance learning to communicate with animals. As she grows up Ani develops the skills of animal speech, but is never comfortable speaking with people, so when her silver-tongued lady-in-waiting leads a mutiny during Ani's journey to be married in a foreign land, Ani is helpless and cannot persuade anyone to assist her.

Becoming a goose girl for the king, Ani eventually uses her own special, nearly magical powers to find her way to her true destiny. Shannon Hale has woven an incredible, original and magical tale of a girl who must find her own unusual talents before she can become queen of the people she has made her own.

In a fabulous blend of the bestselling traditions of Prep and The Devil Wears Prada, Secret Society Girl takes us into the heart of the Ivy League’s ultraexclusive secret societies when a young woman is invited to join as one of their first female members.

So when Amy receives the distinctive black-lined invitation with the Rose & Grave seal, she’s blown away. Could they really mean her?

Whisked off into an initiation rite that’s a blend of Harry Potter and Alfred Hitchcock, Amy awakens the next day to a new reality and a whole new set of “friends”—from the gorgeous son of a conservative governor to an Afrocentric lesbian activist whose society name is Thorndike. And that’s when Amy starts to discover the truth about getting what you wish for. Because Rose & Grave is quickly taking her away from her familiar world of classes and keggers, fueling a feud, and undermining a very promising friendship with benefits. And that’s before Amy finds out that her first duty as a member of Rose & Grave is to take on a conspiracy of money and power that could, quite possibly, ruin her whole life.

A smart, sexy introduction to the life and times of a young woman in way over her head, Secret Society Girl is a charming and witty debut from a writer who knows her turf—and isn’t afraid to tell all....

Every night, Shahrazad begins a story. And every morning, the Sultan lets her live another day -- providing the story is interesting enough to capture his attention. After almost one thousand nights, Shahrazad is running out of tales. And that is how Marjan's story begins....  It falls to Marjan to help Shahrazad find new stories -- ones the Sultan has never heard before. To do that, the girl is forced to undertake a dangerous and forbidden mission: sneak from the harem and travel the city, pulling tales from strangers and bringing them back to Shahrazad. But as she searches the city, a wonderful thing happens. From a quiet spinner of tales, Marjan suddenly becomes the center of a more surprising story than she ever could have imagined.

Heather Wells Rocks! Or, at least, she did. That was before she left the pop-idol life behind after she gained a dress size or two — and lost a boyfriend, a recording contract, and her life savings (when Mom took the money and ran off to Argentina). Now that the glamour and glory days of endless mall appearances are in the past, Heather's perfectly happy with her new size 12 shape (the average for the American woman!) and her new job as an assistant dorm director at one of New York's top colleges. That is, until the dead body of a female student from Heather's residence hall is discovered at the bottom of an elevator shaft.

The cops and the college president are ready to chalk the death off as an accident, the result of reckless youthful mischief. But Heather knows teenage girls . . . and girls do not elevator surf. Yet no one wants to listen — not the police, her colleagues, or the P.I. who owns the brownstone where she lives — even when more students start turning up dead in equally ordinary and subtly sinister ways. So Heather makes the decision to take on yet another new career: as spunky girl detective!

But her new job comes with few benefits, no cheering crowds, and lots of liabilities, some of them potentially fatal. And nothing ticks off a killer more than a portly ex-pop star who's sticking her nose where it doesn't belong . . .

Gossip columnist and single New York City girl Mel lives lives in the most exciting place in the world, yet she's bored with her lovelife. But things get interesting fast when the old lady next door is nearly murdered. Mel starts paying closer attention to her neighbors—what exactly is going on with the cute boy next door? Has Mel found the love of her life—or a killer?

Alanna: The First Adventure (Song of the Lioness) by Tamora Pierce (1983)

"From now on I'm Alan of Trebond, the younger twin. I'll be a knight."
And so young Alanna of Trebond begins the journey to knighthood. Though a girl, Alanna has always craved the adventure and daring allowed only for boys; her twin brother, Thom, yearns to learn the art of magic. So one day they decide to switch places: Disguised as a girl, Thom heads for the convent to learn magic; Alanna, pretending to be a boy, is on her way to the castle of King Roald to begin her training as a page.
But the road to knighthood is not an easy one. As Alanna masters the skills necessary for battle, she must also learn to control her heart and to discern her enemies from her allies.
Filled with swords and sorcery, adventure and intrigue, good and evil, Alanna's first adventure begins -- one that will leard to the fulfillment of her dreams and the magical destiny that will make her a legend in her land.

Anna and the French Kiss by Stephanie Perkins (2010)

Anna is looking forward to her senior year in Atlanta, where she has a great job, a loyal best friend, and a crush on the verge of becoming more. Which is why she is less than thrilled about being shipped off to boarding school in Paris--until she meets Étienne St. Clair. Smart, charming, beautiful, Étienne has it all...including a serious girlfriend.

But in the City of Light, wishes have a way of coming true. Will a year of romantic near-misses end with their long-awaited French kiss?

Thanks for stopping by my blog, I'm excited to see what back-list books everyone else has shared. Please feel free to comment below and leave a link to your #FF or to your most recent post. Happy Reading!

This site prefers a follow by bloglovin' and/or GFC

Jenn
Tale of Two Doxies
www.taleoftwodoxies.blogspot.com
Posted by Jennie at 7:07 AM